You are at:Home»News»WA’s Best Steak Sandwich 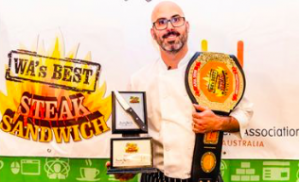 The steak sandwich competition that stops the nation has come to an end, with the Merrywell at Crown Perth and the Bayview Bar in Bunbury taking out WA’s Best Steak Sandwich for Perth and regional WA respectively.
WA’s Best Steak Sandwich competition for 2018 was a fiercely fought event, with a record number of venues participating and the quality of the sandwiches reaching new highs.
Eight finalists faced off against each other in a live cook off on Tuesday and Wednesday, at the AHA (WA) Hospitality Expo, held at Crown. Four finalists from regional WA battled it out on Tuesday, with the Bayview Bar in Bunbury taking home the top gong for a second year in a row.
The Bayview Bar won a close contest against Divers Tavern (Broome), Cervantes Bar and Bistro and Lancelin’s Endeavour Tavern. The Bayview Bar’s Hoang Hung Nguyen won the prestigious award with his aged scotch fillet cooked in clarified garlic and thyme butter.
On Wednesday the competition against the Perth based finalists was intense, with the Merrywell’s Daniel Lopes winning by a nose with his lamb steak sandwich. Daniel took home the win against the CY O’Connor Village Pub, the Carlisle Hotel and last year’s winner, the Karalee on Preston.
The Australian Hotels Association (WA) CEO Bradley Woods said the competition was taken to new heights in 2018.
“The quality of the sandwiches presented this year was simply outstanding, with new entrants exceeding expectations and the finalists raising the bar to a new level,” Mr Woods said.
“The AHA is so proud to sponsor a competition that is significantly raising the standard of this iconic menu item.”
“Each year we see the quality of the steak sandwiches improve but this year in particular we saw some simply superb creations.”
“The high standards that this competition demands is testament to the hard work of the chefs and staff in venues across the state.”
“The epic battle that we saw this year will resume next year and we are excited to see what wonderful creations kitchens across WA will produce.”