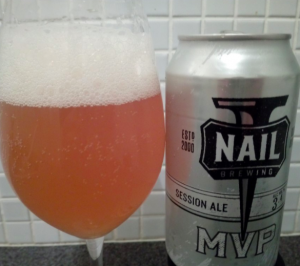 Nail Brewing’s, Nail MVP won Champion low alcohol beer at the Australian International Beer Awards in Melbourne. This is a great win for Nail and highlights the strength of the Western Australian Craft Beer industry. Another leading WA brewery, Beerland Brewing, won Champion beer with its Beerland Wheat Beer.
Nail Brewing started in 2000 as the first brewery in the Perth CBD. In 2004, John was assaulted and received an acute head injury from a one-hit coward punch during a night out in Fremantle, WA. The tragic repercussions of this meant that as well as his severe injuries he had to shut his brewery down. After 2 years of recovery, John got back into brewing as a Gypsy brewer, brewing Nail beers in different locations. John has brewed at Edith Cowan University Joondalup(ECU) for 6 years and in 2012 started brewing in his own brewery again in Bassendean. In 2016, Nail Brewing moved to a bigger production warehouse, 500 meters along, on Collier Road Bassendean. Nail Brewing has now won a total of 11 golds at AIBA. And recently, world wide recognition at the World Beer Cup where Nail VPA won a most sought after Silver medal.
Nail MVP is a new beer which was added into Nail’s core beer range in December 2017. A highly hopped, flavoursome beer, yet super easy to drink at 3.4% alc.  Called MVP = Mid Very Pale,  MVP is a lower alcohol version of VPA (6.5%alc).