You are at:Home»News»And the winner is… 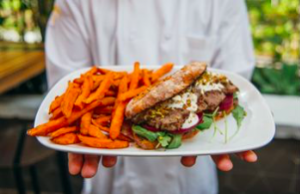 The Merrywell’s Merry Had a Lamb Sanga takes the crown as Perth’s Best Steak Sandwich at the AHA WA Hospitality Expo. Third time is certainly the charm for The Merrywell, taking out the metropolitan title in AHA WA’s Best Steak Sandwich competition for a third time at the AHA WA Hospitality Expo held in the Crown Ballroom on Wednesday 16 May.
The ‘steaks’ were high as The Merrywell Chef de Cuisine, Daniel Lopes, battled it out against three other finalists in the grand final cook-off, which saw Crown Perth’s hero pub come out on top with its mouth watering Merry had a Lamb Sanga.
The panel of judges couldn’t get enough of the winning flavour combination – with grilled lamb rump steak, chipotle & fig relish, beetroot pickle, feta mayonnaise & pistachios on a custom designed potato & roast onion bread.
With The Merrywell taking out the metropolitian award for Best Steak Sandwich in both 2013 and 2015, Chef Lopes says he was resolved to reclaim the title and up the ante for his first ever entry since taking over as the pub’s Chef de Cuisine.
“This year we decided to try something different by incorporating WA lamb along with locally sourced produce. It’s an exciting flavour combination that has also proven very popular with our customers”, said Lopes.
Specialty sangas are in high demand on the menu at the moment, with a West Coast Eagles and Fremantle Dockers sanga battle currently on offer – with $5 from every team-themed sanga combo purchased going to charity.
Lopes will now take the battle to the rest of the state. The metropolitan and regional winners are now in the running for WA’s Best Steak Sandwich which will be announced at the AHA-Aon Hotel & Hospitality Awards for Excellence.