You are at:Home»Beer»Heading East in May/June? 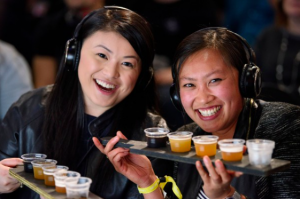 If you’re heading over East in May/June, check out GABS Beer, Cider & Food Fest in Melbourne 18-20 May and Sydney on 2 June. You can get tickets online here or at the door.
Celebrate what makes you, you, when Little Creatures LIVE returns to GABS. The travelling roadshow that celebrates self expression and individuality through live performance art, and of course great beer. Back by popular demand will be ever popular house band The Ale Capones, working the room like no one else can. In Melbourne, check out the raucous New Orleans inspired seven-piece outfit Horns of Leroy. And in Sydney, The Aston Martinis and the Swing Katz, who’ll be dancing up a storm. It’s good to be a little different.
To celebrate their 30th anniversary, Milawa Cheese have teamed up with a few of their mates to make three washed rind cheeses, washed in Starward Single Malt Whisky, Bridge Road Brewers B2 Bomber Mach 7.0 and Brown Brothers Rosé Prosecco. These very special releases will be available for the first time at GABS, and go wonderfully well with a glass of Brown Brothers Prosecco.
Every year, the best of the best Aussie and Kiwi craft brewers and cidermakers make a brand new beer of cider to be served for the first time at GABS. Right now, all of those wonderfully creative producers are working feverishly away on their brews, mashing, boiling, and lovingly preparing their delicious concoctions for your enjoyment.
Amongst this batch, you’ll find Pirate Life’s Montenegro collab, Sierra Nevada’s gin barrel-aged Belgian Tripel, Shifty Lizard’s beer made with edible ground crickets, and Stomping Ground’s Zoolander-inspired Orange Mocha Frappuccino. There’s even a Bourbon Barrel Aged Maple Pecan Brown Ale from Yulli’s Brews.
And for the cider fans, this is the list for you! Think apple, pear, cinnamon, grandma’s jam, honey, apricots and summer berries. There are 14 hugely creative ciders from the very best producers around Australia and New Zealand to try.