You are at:Home»News»RENEWED FOCUS ON TOURISM PRODUCING RESULTS FOR WA 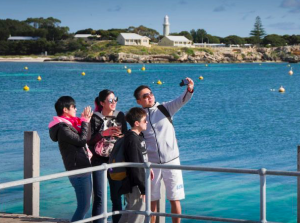 The release of Tourism Research Australia’s (TRA) latest National Visitor Survey (NVS) has revealed promising signs for Western Australia’s tourism industry, underscoring the importance of the State Government’s recent efforts to boost visitation to the state.
For the year ending June 2018, there was a 7.6 per cent increase in Western Australians travelling around the state, leading to a 14 per cent increase in the number of nights stayed.
During the same period, WA saw interstate visitors increase by 11.3 per cent, who collectively spent an additional 4.7 per cent compared with the same period last year.
The rise in both interstate and intrastate visitation was driven by those travelling for a holiday as well as those travelling for business.
Australian Hotels Association (WA) CEO Bradley Woods said the data showed positive increases in several fundamental indicators that were encouraging for the state.
“This data shows more Western Australians are travelling within the state and encouragingly, more Australians are travelling from other states and territories to experience what WA has to offer,” Mr Woods said.
“Anecdotal evidence coupled with today’s NVS data tells us that increased visitation is being driven by sporting events at Optus Stadium and a record number of headline acts at Perth’s RAC Arena.”
“The State Government’s focus on boosting tourism through the east coast Hotel Perth campaign in the first half of 2018, has led to the Perth area experiencing more than a 20 per cent increase in interstate visitation during this period.”
Mr Woods said that recently announced direct flight paths will also help support additional visitation, which will ultimately generate more jobs in WA’s hotel and hospitality industry.
“We look forward to seeing visitor numbers continue to grow as additional flight paths to Perth from the Gold Coast and Tasmania come online.”