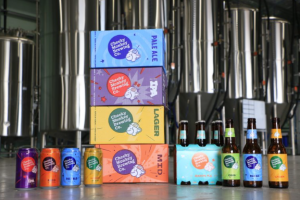 Cheeky Monkey Brewing Co. has completed construction of a new production brewery in Vasse, Busselton, WA.
Located 20 to 30 minutes away from the original brewery, the new site was built from scratch by the team. Inside the 15,000 square metre shed, the brewhouse features a four-vessel Premier Stainless 25 hectolitre brewhouse, capable of producing 10,000 to 20,000 litres per day. Cheeky Monkey is aiming to brew 1 million litres per year, but there is considerable room for growth moving forward, with a potential capacity for 4 million litres a year.
“Because the shed is so big, we have plenty more room to expand and grow,” explains Brent Burton, managing director of Cheeky Monkey. “It’s a purpose-built production brewery. When you’re constructing a new building and installing new equipment there are delays that keep popping up, but we’re finally at the end of the road now and we’re rolling out the beers over the next two to three weeks. It’s really exciting stuff for us.”
The site also features a fully automated bottling and canning line, as well as an in-house laboratory and a small bar located in the heart of the brewery.
“We want our customers to be immersed in the production brewery experience,” adds Burton. “You can go to a lot of brewpubs these days where you can see the brewery through the bar, but we thought we’d like to take that one step further and put a little bar in the middle of the production brewery. That will be quite interesting to see.”
The original brewery will continue to brew as a “product development site” with the beers brewed there only available at the venue.
To complement the new brewery opening, Cheeky Monkey has undergone a rebrand. As well as changing the name from Cheeky Monkey Brewery to Cheeky Monkey Brewing Co., the company has changed its branding as it looks to go national and international with its beers.
“With a new brewery, we thought we had better invest in the brand as well,” says Burton. “We wanted to compete with market-leading products like Stone & Wood and the like. That’s the main reason we’ve invested in the brand. We went through a brand identity and design stage and then designed it from there.”
The expansion and rebrand has been funded by the company’s existing sharebase of the family and friends who initially got the family brewery off the ground back in 2012.
Looking ahead, Cheeky Monkey has set it’s sights on WA first, before looking to other states, as well as other nations like Singapore.
“(WA) is our backyard, so we want to dominate this market first, then naturally, we’ll look to the eastern coast market,” says Burton. “They are pretty congested at the moment, but we’ll get our beers over there whenever there’s an opportunity to do so.
“We’re also looking to export our beers as well – to Singapore, Hong Kong and south east Asia. We’ve had a contract with Singapore Airlines since last year. Our Pale Ale is served in business class flights between Perth and Singapore. We’ve got a good relationship with the airline there that’s opened a few doors for us to creep into the Singapore market when we’re ready.”