You are at:Home»Beer»Nail VPA wins silver at the World Beer Cup 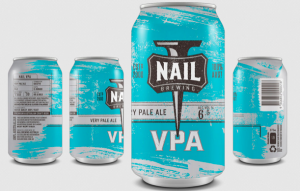 The World Beer Cup is the most prestigious beer competition in the world, with 8,234 entries from 66 countries. Nail Brewing has won consistent golds and trophies at beer awards for over 10 years, but this is their first time winning at the World Beer Cup.
The beer entered was fresh as possible, fresh from the canning line in Bassendean, flown to Sydney on the same day, and entered to the Sydney depot on the following day, so that when it arrived in the USA it was the best it could be.
Nail’s founder John Stallwood wasn’t in Nashville, which meant he was able to celebrate the victory with a fresh can of VPA upon hearing the news. He says the win was something of a surprise considering the sheer number of brewers who enter, but was incredibly proud of both the beer, and everyone involved in brewing it and getting it to America.
John Stallwood said “Winning a medal at the World Beer Cup is a dream and an honour. I was watching the awards live online and was pumped seeing Nail listed as the silver medal winner for best international pale ale – Australian pale ale. 122 beers were entered in the style, so to win 2nd place was a great honour.”
Nail VPA is Nail Brewing’s new booming beer. A highly hopped flavoursome beer, yet easy to drink. VPA = Very Pale Ale. A more revved up pale ale at 6.5% alcohol but light in colour makes it a Very Pale Ale.