On entering the Esplanade Hotel in Fremantle we were transported back to an age of elegance and tradition. The spacious foyer leads to a choice of bars and dining areas and we opted for The Harbour Master Bistro to sample some of the dining options available, starting out with a High Tea. 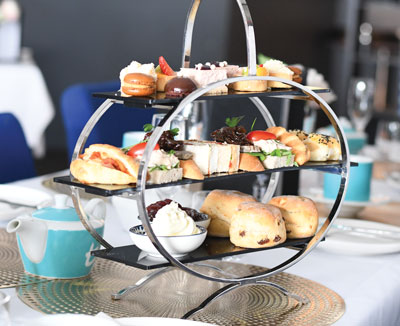 The term ‘High Tea’ originally referred to a working-class meal at the end of the working day, generally served on a high table and accompanied by a pot of tea. Perhaps because afternoon tea was associated with High Society, and the three-tier tray it is often served on makes it physically high, these days we associate a High Tea with a more genteel offering of afternoon tea, generally consisting of finger food and an assortment of little cakes, often served on a three-tier tray, with your cup of tea.

High Tea at The Esplanade is served on weekends between 2pm and 4pm, and consists of tasty morsels served on a traditional three-tiered tray, accompanied by champagne, orange juice, coffee or pots of your choice of a selection of Dilmah gourmet teas.

On the bottom tier was a selection of warm, plain and fruit scones with preserves and whipped cream. What a delightful way to spend a leisurely afternoon. 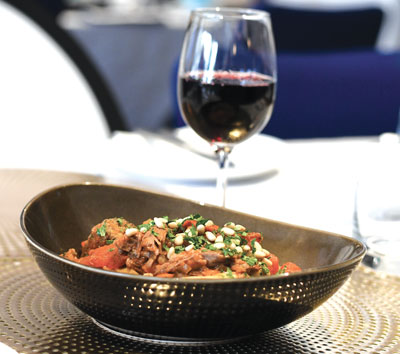 Another feature from The Harbour Master is the Bottomless Brunch – again served on a three-tiered tray, this could be a late, hearty breakfast or an early lunch. What an opportunity to indulge in Bloody Mary shooters topped with a grilled prawn and a stick of celery – perhaps a hair of the dog for the morning after a big night out? or Eggs Benny with smoked salmon and hollandaise, rustic meat pies, raspberry doughnut balls, sweet waffles with little jugs of maple syrup and berry compote to pour over them. All this, plus bottomless beverages – wine, juice, tea and coffee – and the entire morning to enjoy it.

Executive Chef Grant Brown has been in charge of the kitchen since 2003, and has continued to support local suppliers including Artisan Patisserie and Mills Bakery. Grant asked us to sample a new dish he is developing for their dinner menu – Braised Shoulder of Lamb, slow-cooked overnight and folded through fettuccine with a sauce of tomato, herbs and pine-nuts, all finished with a glass of West Cape Howe Shiraz.
After trying the High Tea and the Bottomless Brunch, we were too full to really do it justice, but the mouthfuls we managed were delectable.

General Manager Brad Hatfield told us that as well as the High Tea which is very popular, they cater for all types of dining. This includes business meetings, functions, romantic dinners, breakfasts and casual lunches, with live music, bar snacks and meals available in the adjoining Ball & Chain Bar as well.