Spice up your life 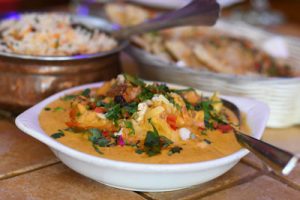 If you like spicy food you should definitely visit Cinnamon Vic for a delicious meal of traditional Malaysian and Indian curries. Indian food is all about spices and flavours and Cinnamon certainly delivers on this front. Cinnamon has been operating since 2004, and despite the 2020 difficulties, is still going strong.
We enjoyed a starter of five pappadums with four different dips while chatting with head chef and owner Pannir Ganesh. He started at Cinnamon as an apprentice chef in 2004 before becoming head chef and eventually bought into the business.

Pannir told us that they choose to support local businesses wherever possible by sourcing supplies from local West Australian companies, and in return, the locals have supported Cinnamon. During the Covid-19 lockdown, when they were forced to close their doors, they lost some of their staff, but managed to survive by doing take-aways. Pannir praised his staff for their loyalty and service and acknowledged the support from the local council through these difficult times.

Now that they can operate as a restaurant again, they have maintained their high standards. Their bryani is very popular as are their fish curries – for which they use Red Emperor or Red Spot Emperor – and Pannir’s favourite is the Goat Curry. Everything is cooked from scratch and made using fresh food with nothing frozen. They purchase fresh meat every few days and serve mainly local wines from Gingin and Margaret River to accompany their meals.

We decided to begin with the Assorted Platter, which consisted of a good selection of vegetable pakoras, onion bhaji, samosa, tender and tasty chicken tikka, and seek kebab. A bottle of 2019 Willespie Semillon Sauvignon Blanc was a good choice and really brought out the spices in the seek kebab. 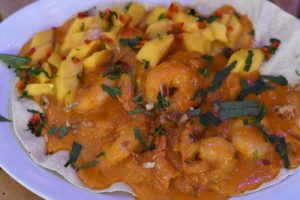 Moving on to the mains, we chose a Beef Balti on Pannir’s recommendation, and were not disappointed. The beef was delightfully tender and was stir-fried with lots of nice vegetables in a medium/hot tangy sauce. We also had the Mango Prawns, which were sweet and creamy and of medium heat, attractively presented on a thin pancake, and topped with chunks of fresh mango. The Chicken Kashmiri was mild in heat but full of flavour, consisting of tender marinated chicken with almonds and slow cooked overnight.

To accompany these curries we had some Cinnamon Special Herb Naan and Garlic Naan, as well as a dish of Kashmiri Pulao (basmati rice cooked with nuts and raisins). The 2019 Willespie SSB was a perfect partner for this meal.

Cinnamon sits on the Vic Park restaurant strip along Albany Highway, where there is plenty of street parking as well as on the side streets nearby. The interior of the restaurant is comfortable and intimate, the decor is tasteful, creating a traditional atmosphere without overtaking the enjoyment of the food.

While Cinnamon has always been known for its beautiful Indian food, with the opportunity for a fresh start, it is also a place for a quick and delicious food experience or to relax and kick up your heels for a night of fun and dancing.