Storytelling with a Twist

Tiller Dining chef George Cooper refers to his dishes as “storytelling with a twist”. There’s no menu as such, but instead George works with each client to discover their taste preferences from which he creates a menu.
Situated in Yallingup Siding, the 50-acre property offers sweeping valley views sheltered from the southern easterly. The purpose-built venue began as a vegetable patch and eventually evolved into a catering business (often catering to Rivendell Winery Estate) and is now an ideal venue for private functions (including the jet set crowd flying down from Perth for the day) and weddings.

George runs the business with his wife Kayleigh, who said, “Our clientele includes those mindful of where and how their food is sourced and are appreciative of sustainability.”

Each dish is an experience and often evolves from what is growing on the land – whether that be protein raised or what’s grown in the thriving kitchen garden. 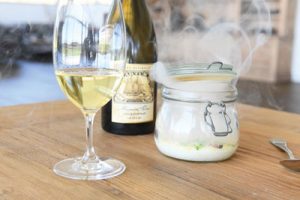 To give an example, George reveals his British heritage from the deconstructed Bacon, Eggs, Chips and Peas served in a mason jar and infused with smoked red gum and apple. Each mouthful was salty, smoky, creamy and crunchy – with the crunchy aspect being my favourite part imparted by sun-kissed peas just plucked from the ground. The 2019 Domaine Naturaliste Artus Chardonnay cut right through the creaminess with a refreshing finish.

The beef short rib dish was probably the more conventional of dishes sampled. Luxuriating in a sticky BBQ sauce infused with Japanese soy sauce, the beef fell apart and melted into the pumpkin puree served with broad beans, pickled scallions, cabbage, leek and greens from the kitchen garden. Everything was grown on-site except for the ribs which came from the Blackwood Valley. The depth of flavour was further emphasised by the rich cherry notes of the 2017 Brash Vineyard Cabernet Sauvignon.

Dessert was a take on Yogo, that iconic chocolate yoghurt meets a chocolate brownie. While it does have a buttery finish like Yogo, it earned its namesake when one of George’s clients named it one Valentine’s Day. The smoke-infused dessert featured chocolate curd, fresh butter foam, aero bombs and caramelised cream and George called it, “the classic dirt dessert”.

Behind the barn doors is where the magic happens in the kitchen. Brian Garcia from Moffat worked with George in conjunction with Moffat’s corporate chef Quentin Phillips to deal with the venue’s requirements. Brian said, “We supplied a Convotherm C4 combination oven with its low water and energy use, along with all the functions available, to allow George and his team to produce the high quality and consistent food that Tiller Dining offers.”

The couple have exciting plans for several cottages to be built over time and to hold more public events such as wine dinners, pop-up dining and ‘sunburnt dining’.