So much more than cider

With its new world take on craft cider, Funk Cider opened in the Swan Valley in 2016. Established by Dustin and Martin Michael, the duo behind Michael Brothers cold-pressed juices and craft sodas, all of Funk’s products are free from pasteurisation, added sugar, preservatives, concentrates and sulphites.

In January 2021, Funk opened a second venue in Henley Brook called Funk 2.0. Dubbed as the cidery’s ‘fermentation playground’, this is where Funk’s cider maker and brewer, Kevin, flexes his creative muscle, resulting in a vast array of ciders, beers, and hybrid beverages. 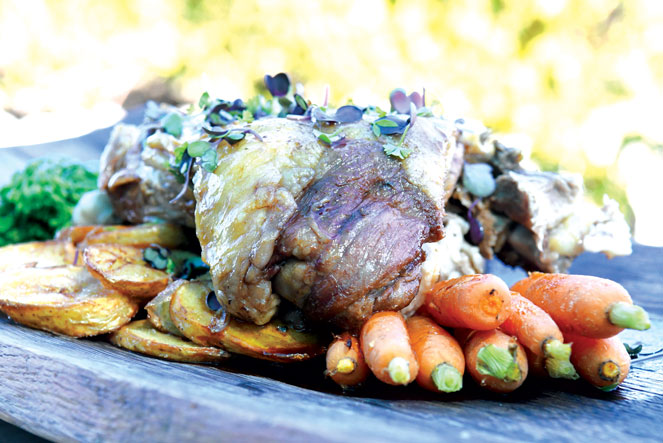 Compared to the party atmosphere of the original Funk Cider venue, Funk 2.0 brings more relaxed vibes. The seating is mostly alfresco with ample shade, courtesy of the wide veranda, shade sails and the twisted old tree the deck has been built around.

Head Chef at Funk 2.0 is Cole Hall, whose resume includes Crown Casino restaurants such as Atrium, Bistro Guillaume and Nobu, as well as White Salt in Sorrento, before his move to the Swan Valley for stints at Mandoon Estate and Henley Brook. Hall has carefully designed a share-oriented menu to match Funk’s craft ciders and beverages, and nearly every dish has a recommended beverage pairing.

We started with a couple of tapas dishes, the first of which was the Chorizo, Octopus, Potato, which was paired with Pineapple Cider. The sweet cider provided a nice contrast with the super-savoury chorizo and tender, smoky Fremantle octopus.

Next was an interestingly titled dish – Pate, Sex Machine Jelly, Baguette. The buttery, mildly flavoured pâté was served with slices of house-baked baguette and a jelly made from their Sex Machine cider. The dish was paired with Perth Cider, which is pleasantly dry and helped to cleanse the palate from the richness of the pâté.

Also paired with Perth Cider, the Pork Belly, Sweet-Potato Puree and Broccolini was a beautifully executed dish. Pork and cider are frequently a winning combination, and this was no exception – the dish and drink were both delightful on their own, but truly incredible together. The generous serving of pork belly was seasoned and cooked to perfection, topped with delicious, crispy crackling, and served with a silky
sweet-potato puree and al-dente broccolini.

We finished on a savoury note with one of their popular share dishes – the Lamb Shoulder with baby carrots, broccolini, kipfler potatoes and cider jus. The lamb is cooked for three hours, then spends time in a sous vide bath before being crisped up in the oven prior to serving. Presented on a big wooden board, this is a comforting dish that evokes memories of Sunday roasts with the family. The lamb was so tender it could have been carved with a spoon, and the vegetables were perfectly cooked. We enjoyed this dish with West Coast IPA – a classic take on the hoppy, dry, and aromatic beer style.

Funk 2.0 is open from 11am to 5pm on Thursday, Sunday and Monday, and from 11am to 9pm Friday and Saturday. I recommend taking a large group so you can make the most of their tapas and share dishes, and be sure to grab a tasting paddle of Funk’s excellent ciders, beers, or hybrids (read more about these on pages 28-29).