When I first walked into Finlay’s, it felt like an old fishing boat harbour straight out of the movie Popeye. It had a relaxed charm about it and the staff really made us feel at home.

Situated in Kalbarri and about six hours north of Perth, I initially thought the drive might be a bit daunting but it was actually quite easy and relaxing.

When we spoke to anyone about Finlay’s they would all say the same thing. “Great beer, seafood and service.” I can say I agree.

Steeped in an unusual hi 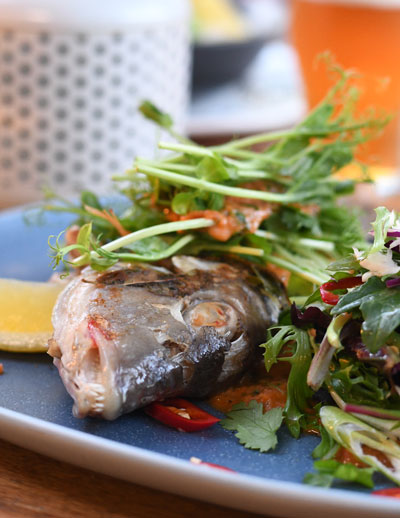 story, the location was previously an ice works factory and then a fish processing plant before becoming a restaurant in 1989. The thing I found really interesting is that the original owner and founder of Finlay’s was Gary Finlay – yet the new owners and operators (since 2018) share the same surname of Finlay but are no relation at all.

Owners Melissa and Warrick make every effort to source all their produce from Kalbarri and when that’s not possible, they will source it from within Western Australia or elsewhere in Australia.

Some of the more memorable dishes we tried were the Shark Bay Cockles in a creamy garlic and wine sauce. The sauce was not too runny or too thick but perfect for dipping bread, which accompanied the dish.

The oysters sourced from Coffin Bay in South Australia were really fresh and popped in your mouth releasing that ocean feeling.

Our host Dan Nielson recommended the Seafood Linguine, which was the special of the day, and I am glad he did. It had a great texture and flavour, our dish comprised of Kalbarri Crayfish, Shark Bay Cockles, tagliatelle pasta, white wine, garlic and chilli to give it a lovely mild heat. I also liked the fact that the crayfish was diced and displayed in its shell. 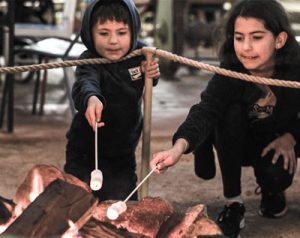 Chef Dheeraj Khanna made us a special dish of locally caught whole Red Throat Emperor. It was also on the special menu and was super fresh. It came with a crispy Asian salad featuring coleslaw, red pepper dressing and I think a bit of fish paste giving it an Indian touch that I really liked.

The kids loved the home-made nuggets and Five Spiced Squid Tentacles and the $1 marshmallows on a stick for the kids to cook in the open fire.

We were there for about five hours but it didn’t feel like it. The kids were well amused with all the boats, playing with the rope shark sculpture, live music, live lobsters and other kids running freely around the place.