Blasta Brewing Company is the creation of Steve Russell – a Scottish-born FIFO worker who took up home brewing in 2015 when his wife bought him a kit for Christmas. The Burswood brewery is just a 20-minute stroll – or one stop on the train – from Optus Stadium, making it ideally situated for post-game and concert crowds. Look around the 500-capacity venue and you’ll find more than a nod towards Russell’s Scottish heritage. The word ‘blasta’ translates to ‘delicious’ in Gaelic, the brewery’s logo is a unicorn – the national animal of Scotland, and for a brewery they have a surprisingly good selection of single malt whiskies and even haggis spring rolls on the menu.

The cavernous beer hall has an industrial feel to it, with high ceilings, Oktoberfest-style bench seating and a row of shiny, stainless steel fermentation vessels right behind the bar. All Blasta’s award-winning beers are brewed on-site in the 20-hectolitre brewhouse. Speaking of awards, at the 2019 Australian International Beer Awards, every beer Blasta entered received a medal – an impressive achievement. The alfresco area is popular with families – there’s a huge sandpit for the kids – and at the back of the building the Blasta Coffee shop offers a full café menu and quality coffee from local roaster 5 Senses.

Blasta’s head chef, Alden Teo, has been there since the brewery opened in March 2018, having previously worked at Mandoon Estate in the Swan Valley. The compact lunch and dinner menu fits on one page and has many of the usual pub classics – pizza, fish and chips, a steak sandwich and a burger – as well as some more adventurous small plates and several dishes feature Blasta’s beers in their list of ingredients. 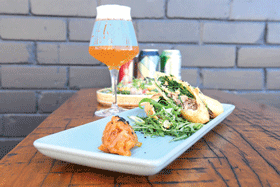 We started with the Bacon Wrapped Stuffed Jalapenos, which had been sliced, de-seeded and stuffed with a cheesy bechamel sauce and served on a bed of rocket leaves. A classic beer snack, the subtle heat of the chillies was the perfect counterpoint to the richness of the bacon and bechamel. These were paired with Unleash the Beast – Blasta’s New England-style IPA, which impressed with its approachable bitterness and big, juicy hop flavours.

Next up were Blasta’s famous Haggis Spring Rolls. While sounding like an odd combination, this Scottish-Asian fusion was truly delicious and our dish of the day. For those who haven’t had the pleasure, Haggis is a traditional Scottish dish made with sheep’s heart, liver and lungs and tastes much better than it sounds. Blasta’s version is encased in crisp pastry, spiked with semi-dried tomato cream cheese and served with an apricot Blastaweizen chutney. The pairing beer was Myway Grapefruit IPA, which has both the bitterness and caramel malt richness to stand up to the super savoury dish.

Our first main dish was a generous serve of Sticky Soy Braised Pork Belly, which was served with a warm somen noodle and wombok salad, coriander, crispy shallots and a soy and tamarind dressing. The refreshing and tangy salad helped cut through the decadent pork belly, which was so tender it could have been eaten with a spoon. The dish was paired with the gold medal winning Grimster Rocks Pale Ale.

We finished with the 300g WA Amelia Park Lamb Rump, plated with duck fat potatoes, a roasted field mushroom, broccolini and red wine jus. The lamb was tender and cooked pink, while the potatoes were beautifully caramelised and well-seasoned. It was served with Blasta’s first ever dark beer – Breaky of Champs Nitro Stout – which provided roasted flavours to complement the char on the grilled lamb but would no doubt work just as well with chocolate cake.