You are at:Home»Beer»BEERLAND PRESENTS CHILLI WEEK 2018 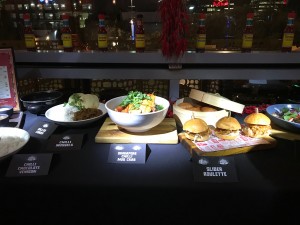 Just as Perth begins to cool down, Northbridge Brewing Co and Whitfords Brewing Co are turning up the heat as they prepare to welcome back Beerland Chilli Week for another year of foodie-fun.
Fuelled by some of the world’s fieriest chillies, the week of adventure kicks off on WA Day, Monday 4 June running through to Sunday 10 June and will see spice fiends band together for a chance to win some seriously awesome prizes.
The Beerland venues will be running a Firehorse Chilli Pong competition that’s set to test the toughest of tongues. Based on traditional beer pong, teams will be invited to face off against one another in hope of sinking the most ping-pong balls into cups filled with virgin Bloody Mary’s doused in burning Firehorse chilli sauce, WA’s premier oak barrel aged chilli sauce. The games will run nightly from Monday 4– Thursday 7 June, commencing at 6pm at Whitfords Brewing Co, and 6:30pm at Northbridge Brewing Co.
Another new experience for 2018 includes the Beerland Chilli Week Passport Challenge. After registering for an event passport, you will be tested to undertake a series of challenges for a chance to win some awesome prizes, including tickets to Beerland’s Beer Clubs, Melbourne Cup and NYE events, as well as vouchers for use at either Beerland venue
Head Chef Tama of Northbridge Brewing Co and Head Chef Kevin of Whitfords Brewing Co have said their teams are looking forward to working with what they call the star of the show – the Carolina Reaper. Recognised as the hottest pepper on earth, the “reaper” is a cross between Sweet Habanero and Naga Viper chillies and will be used across a number of special menu items, including the signature Singapore Chilli Mud Crab and Slider Roulette.
In the bar, Ken Arrowsmith and his Beerland brewing team will be releasing a limited edition Habanero IPA that can be enjoyed at either venue or taken home in the form of a ‘Canimal’ – a 946ml can filled fresh from the tap and sealed on site.
To finish off the fiery week, Whitfords Brewing Co will host a closing party on Sunday 10 June from 3pm, with prizes drawn at 5.30pm.